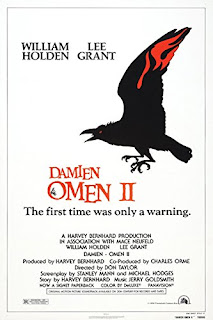 "Forces from him shall appear and profane the temple and fortress, and shall take away the regular burnt offering. And they shall set up the abomination that makes desolate." - Daniel 11:31

With the second installation—to take on the teenage years of Damien—we get a change of pace with all new actors, but one, and some fresh faces in the filmmaking crew. Lessened is that relentless, dark and looming atmosphere from the first film, and in its place is an attempt to go for more everyday realism to establish some background of the characters. Some major themes here are politics, severing ties, and mastering a fight to the death without throwing a punch.

One portion of the tale shows the upbringing of Damien under the wing of his rich and powerful uncle, Richard, who spearheads Thorn Industries—a sort of global powerhouse with hands in this and that—along with an almost humanization of the Antichrist while he attends a prominent military academy and finds out who his true friends and enemies are. I felt that was a clever move to give a slight pull and tug dynamic to what's just conceived as an embodiment of evil. Though if pushed deeper—instead of hovering around the surface—this story could have burrowed under your skin, and remained a permanent scar when thinking of the personification of the son to darkness. For a movie about Damien, it should have focused more on him rather than using this as a pedestal for things to come. There's still shreds of life to him, and some different hues and shades. Though it doesn't seem to last long and resorts back to stoic looks, and a that-person-knows-too-much-and-must-die film.

What becomes its undoing is that it feels like a sequel instead of a stand alone film. It turned "The Omen" into a franchise with a predictable formula. One you can count on, sure, but not one that will surpass anything the first established already. It works in areas to put you in the moment from the acting to the generous score—with a return from Goldsmith to pull a few more spellbinding variations—but in other areas it feels a somewhat stale echo to the past. It was a tough balance to strike, in that the story expands on itself, and at the same time attempts to go for more horror and shocks. At points it loses its sense of mystery when it steps out in the open: fighting in the hallways with unparalleled powers, or answering back smugly in the classroom as if everyone around is a lesser being. It felt more to sell you the allure of it all, then pull the rug out from under when you realize how much of a monster he's grown up to be. It's also conflicting seeing this, in that the audience is repeatedly told who he is, but by the time the characters catch up to realize what's going on, the impact of it at that moment is lessened.

The film generates a particular modus operandi: a sort of Antichrist pyramid, so to speak, that establishes who's where in the pecking order. If you find yourself at the bottom, you'll soon get a haunting visit from a raven—with Latin chanted theme to set up the inevitable—which is a sure trip to the casket in more than one piece. As horrific as the deaths are, they still come with easy to guess certainty of who's going to get an early demise, or, on the other hand, who's in conspiracy with the dark side. It turns a potentially gray film, into a black and white one. Guess the more low-key and practical way of making every opposing person inconspicuously deaf, dumb, mute, or blind isn't as entertaining.

Written by TheHrunting at 8:21 PM

The Black and Red Spectrum